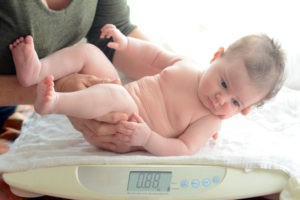 One of the biggest concerns all new moms have is whether or not their baby is gaining enough weight, especially when they are breastfeeding. Moms go to their baby’s first few checkups holding their breath when their baby is put on the scale, waiting to see what the doctor’s verdict is. Is their baby in the 50th percentile or above?

Awesome…unless they are above the 90th percentile, in which case they must be gaining weight too fast, and are going to be overweight children and adults (and we know what a growing problem obesity is, especially in the US).

On the other hand, what if your baby is below the magical 50th percentile? Oh no…he must be starving. (Sarcasm intended)

It’s important to remember that all the “percentiles” and statistics apply to the mythical “average” baby, who doesn’t exist in real life. Weight gain is only one measurement of growth, but doctors often tend to focus on the weight charts alone.

Here is what you need to keep in mind: When your baby is in the “50th percentile” for weight or length, it simply means  that half of the babies measured at that age weigh more than him (or are longer than him), and half weigh less (or are shorter).

Here are some guidelines that will give you an idea of what to expect as far as growth patterns in ‘normal’ breastfed babies.

Formula fed babies are often encouraged to finish the “last little bit in the bottle” (after all, formula is EXPENSIVE), and they have such a strong need to suck (especially when they are newborns ), that they will often continue sucking as long as the artificial nipple is in their mouth, even after their tummies are full.

On the other hand, it is nearly impossible to make a breastfed baby nurse once he decides he has had enough. Breastfed babies must be actively sucking in order for the milk to flow strongly.  When they are nursing at the breast for comfort (non-nutritive sucking), as opposed to when they are really ‘hungry’, they are receiving only a trickle of milk. When they are very hungry, they nurse more vigorously, and receive a faster stream of milk. (See article Introducing Bottles and Pacifiers to a Breastfed Baby for more information.)

Many doctors aren’t aware of the new guide lines. When using the older growth charts (which are based on formula fed babies), they may think that a breastfed baby whose weight gain slows after the first few months is a red flag, and may recommend supplementing with formula. They may also express concern about babies who gain weight at a greater than average rate, especially during the first few months.

Babies who are breastfed may gain weight faster than those who are formula fed during the first 2 or 3 months. If a doctor goes by the old charts (based on formula fed who received solid foods earlier than today’s infants), and not on breastfed babies (who should be considered the ‘norm’), he may think that the formula fed baby’s excessive weight gain is normal, and not intervene to help them get to a healthier weight. This may lead to obesity later in life, and we know that obesity is one of the biggest health problems we have in this country.

The most important thing to remember is that breastfeeding is the biological norm, and baby’s weight should be evaluated based on that, rather than comparison to formula fed babies. Make sure your doctor is aware of the importance of using the new growth charts when he evaluates your baby’s weight. They give a much more accurate result than the old ones that were used for decades.

During the first couple of weeks after your baby is born, while your milk supply is being established, it’s especially important to make sure that he is getting enough to eat. (See How Can If Tell if My Baby is Getting Enough Milk)

In evaluating a baby’s growth patterns, the following factors are equally as important as weight gain and  should be taken into consideration:

Your health care provider should look at all of these factors when evaluating your baby’s growth, not just how many ounces he gained in a given month, or what percentile he is on the weight charts.

If your health care provider considers all these factors and determines that there is a genuine reason to be concerned about your baby’s weight gain, this article will give you detailed information on how boost your milk production: Increasing Your Milk Supply. If he tells you that your exclusively breastfed baby is overweight, or is ‘too fat’, then it may be time to get a second opinion, or possibly, look for another who is more knowledgeable about and supportive of breastfeeding.

I have had two babies out of six who didn’t gain weight the way all the charts and the doctors said that they should. They both started out at the 95th percentile at birth, and ended up at the 10th during the second half of their first year. I tried everything to get them to eat, and they still stayed on the low, low end of the charts. They are both very healthy and intelligent adults now, but one is thin and can eat anything without gaining weight, and the other is what would be considered ‘average’, and her weight fluctuates within normal range according to her activity level and food intake.

I believe that to a degree, babies are genetically ‘programmed’ to be on the thin or the heavy side, according to family history. My six kids have two different dads. All were exclusively breastfed until around the middle of the first year of life, and I practiced cue feeding and baby led weaning with all of them. I wish I had figured out that there was only so much control I had over their weight when they were babies. I could have saved myself a lot of worry, because I stressed way too much about their weight gain during the first year, and tried my hardest  to force feed them, which never, ever worked.

In my experience, a healthy baby who is fed breast milk on demand, as well as offered a variety of nutritious foods once he starts solids,  is going to be just fine. He may not follow the pattern of the “average” baby exactly, but then you have to remember that the average baby simply doesn’t exist in real life.

None of my six babies were “average”…is yours?

References: WHO Growth Standards  (Recommended for Use in the U.S. for Infants and Children 0 to 2 Years of Age)

The World Health Organization (WHO) released a new international growth standard statistical distribution in 2006, which describes the growth of children ages 0 to 59 months living in environments believed to support what WHO researchers view as optimal growth of children in six countries throughout the world, including the U.S. The distribution shows how infants and young children grow under these conditions, rather than how they do grow in environments that may not support optimal growth.

Not all doctors are aware of the updated charts. If they are not using the revised and more accurate information, share these links with them:  http://www.cdc.gov/growthcharts  and http://kellymom.com/bf/normal/weight-gain/.

If you found this article helpful, please consider making a small donation to my favorite cause – Project Pets: Spay, Neuter, Love – an all volunteer, non-profit organization that provides free spay and neuter services for homeless rescue dogs and carts…because every baby deserves a home, whether they have two legs or four! To find out how you can help,  visit Project Pets on Facebook.

Ask Anne… Question: I’m due in two months, and I’m afraid I won’t have enough …