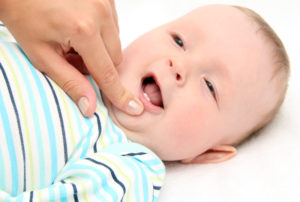 Many new mothers tell me that they plan to nurse their babies for six months, or until they get teeth. With the AAP (American Academy of Pediatrics) now recommending nursing for at least a year, it makes sense to re-examine our ideas about breastfeeding babies with teeth. I have had two babies out of six who got teeth at four months, so if I had weaned them at that stage, they wouldn’t have been able to nurse for long at all.

Most babies will cut their first teeth sometime around six months. Usually the first teeth come in fairly easily, accompanied by a lot of drooling and chewing everything he can get his hands on. Cutting teeth may make your baby’s gums swollen and sore, and he may try to chew on the nipple just as he chews on everything else to relieve his discomfort.

The first molars, cut at about a year, tend to cause the most discomfort. The very first tooth, and the second one that will follow it soon afterwards, will be bottom front teeth. It will probably be months before the matching top teeth come in, so even if he tries, he can’t really bite effectively (closing the top teeth against the bottom teeth) for a while. That doesn’t mean that a bite won’t be uncomfortable with one or two bottom teeth, however. We’ll discuss why some babies bite, how to prevent biting, and what to do if you do get bitten.

Many babies never ever bite at all, and most who try it once usually respond to your startled reaction by never doing it again. With some babies, it is a little harder to break the habit, but all babies, no matter how old, can learn not to bite.

A baby who is latched on and nursing properly cannot bite the breast. If the nipple is positioned far back in his mouth, and his lips and gums are positioned about an inch behind the nipple on the areola, then his tongue will cover his gums, between his lower teeth and your breast. If he is actively nursing, he can’t bite – and if he is biting, he can’t be actively nursing at the same time. He should never really close his teeth on the breast while nursing, but his upper teeth will occasionally cause an imprint on the areola due to slight pressure exerted during feedings. This usually occurs with older babies, and is seldom painful. If it is uncomfortable, you can take him off and re-latch him. That will usually take care of the problem.

Here are some tips on how to prevent biting:

Here are some tips on what to do if your baby bites you:

If  you found this article helpful, please consider making a small donation to my favorite cause – Project Pets: Spay, Neuter, Love,  an all volunteer, non-profit organization that provides free spay and neuter services for homeless rescue dogs and cats…because every baby deserves a home, whether they have two legs or four! To find out more about how you can help, visit Project Pets on Facebook. 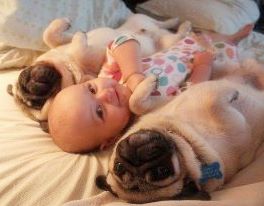 My toddler’s teeth scrape my nipples when she nurses

Breastfeeding Is My Everything

Ask Anne… Question:  I have a six month old baby that, due to personal reasons, I …